So many people are calling to slow down the process and bring in more outside people. Most don’t know that it was tried before and failed miserably. The recommendations of the Long Range Planning Committee failed, despite over six months of work by parents, staff and business people.

The process started off to great fanfare in August 1999. 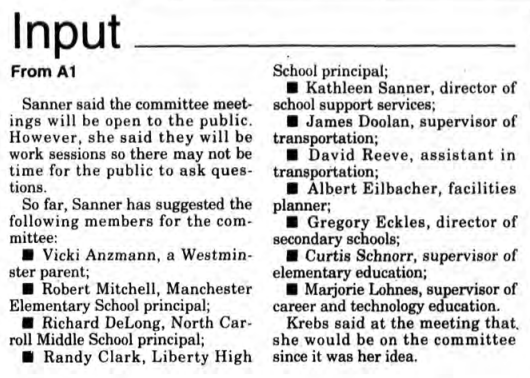 But seven months later, it was deemed a disaster.

Is anything different this time? Would parents be any more accepting of a school closure because there were parents, county employees and business people were on the committee? We think not.

However, as we’ve said before, we would have liked to see the Community Advisory Council more involved in the process. The CAC is a committee of representatives from each school appointed by the school’s principal. It could be a parent, staff or in some cases even the principal. The latter two often occur when an interested parent cannot be found to serve, something that happens way too often. The Boundary Adjustment Committee presented Options 1 and 2 to the CAC in September and the superintendent’s final recommendation in November. These meetings were open to the public, but very few attended.

We would have liked to have seen the committee members’ comments and the BAC committee’s responses formally recorded. Options 3, 4 and 5 should have been presented and comments taken even if it required a special meeting. Perhaps there should have been a vote and/or a statement from the committee. We think the opportunity for a two way conversation was there, but wasn’t taken.

One thought on “A Little Trip Down Memory Lane”